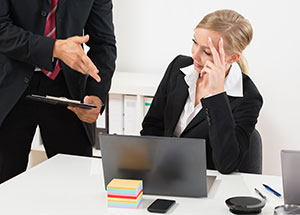 Ways to Deal with a Bad Boss

Most of us have had an experience with a bad boss at some point in our careers, or know someone who has. Bad bosses can seem more common because they tend to stick out in an organization.

Bad managers can be a high cost to an organization. Often a bad boss will drive away several good employees before anything is done about it.

The thing to remember is that usually a bad boss is not a bad person, just a bad leader.

When a subject matter expert or a long-term employee is promoted to management without any leadership training, their other job skills simply don’t translate. Then the problem is only exacerbated as the bad boss is shuffled from department to department, instead of trained or placed into a non-leadership position where he or she actually excels.

I’ve seen it happen time after time. This shuffling doesn’t do the organization any good, or the person any good. They never get the opportunity to do better.

Most people have a good heart, but they struggle figuring out how to deliver constant, clear and timely feedback to their employees. This is at the crux of most bad boss behavior. If you can’t deliver regular feedback in a way that is well received, then you will continually struggle to manage employees.

This struggle to manage then results in bad behavior like impatience, anger, blaming, micromanaging, not listening, discounting opinions, favoritism, and simply the inability to connect. You can’t be a great boss unless you’re really connecting with your people.

What You Can Do
Most people are too scared to confront a bad boss directly about his or her behavior. They are afraid of the consequences and possible retaliation. And generally bad bosses lack self-awareness, so direct communication may not go over well.

Don’t go behind your boss’s back or over his or her head. This is usually not an effective idea, and it eventually gets back to the person anyway.

If you can’t beat them, join them. But join them in a way where they never see you coming. The best thing to do with a bad boss is to connect with him or her.