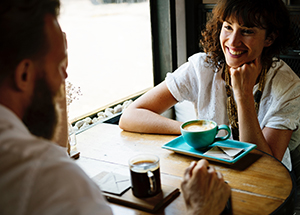 How to Start a Conversation with Anyone

I was recently traveling for business, and grabbed a bite to eat at a pub in the airport terminal. The woman sitting next to me at the bar was very engaged in the hockey game playing on TV, to the point where she jumped in her seat when a goal was scored. I asked her if she knew much about hockey, and she told me that she did know quite a bit about the game because she was from Minnesota. I then mentioned to her that I had just flown into Chicago in the fog and that her flight might be delayed if she was due to depart soon. Soon we were having a natural conversation about family and work that had started with sports and the weather—both fairly neutral topics that can apply to most people and ultimately lead to a meaningful conversation.

Starting a conversation with a stranger can be intimidating for many people. As a natural extrovert, I have a tendency to look for ways to engage with most everyone I encounter. Here are a few tips to take small talk from brief and courteous to interesting and meaningful.

Find common ground. It’s easy to find a conversation starter if you just pay attention. Take note of what the person is wearing (maybe a team shirt or interesting socks) or what they are doing (looking at photos of grandkids or reading a book you’ve read), and then start the dialogue around that. On a recent flight, I started a conversation with my seatmate, who, evidenced by her attire, was travelling for work. I asked her where she worked and that one simple question lead to an exchange that lasted the entire flight.

Use FORM. This one has been around for a while, but it’s a great tip, and I use it often. FORM stands for Family, Occupation, Recreation, and Mission. Asking questions about these four topics typically sparks automatic dialogue. People generally love to chat about FORM topics because they are what matter most in life.  And they are easy ways to exchange stories and find commonalities.

Listen to hear. To keep a conversation moving, truly listen to what the person has to say. This will make your responses more authentic and engaging. My personal rule of thumb is to talk for only about 30% of the conversation, allowing the other person talk for 70%. You’d be amazed what you learn when you stop sharing what you already know.

Understand your communication style. My DISC score (D=Dominance, I=Influence, S=Steadiness, C=Compliance) is a high DI, so I know that I have a tendency to dominate a conversation. Because of this, I try to guide the conversation, while being mindful of the ways I might accidentally overtake the dialogue. A real bonus comes from knowing both your DISC score and that of the person you are speaking with. Understanding others’ communication preferences is a powerful tool to help you create meaningful conversations.

This blog originally appeared on www.price-associates.com.